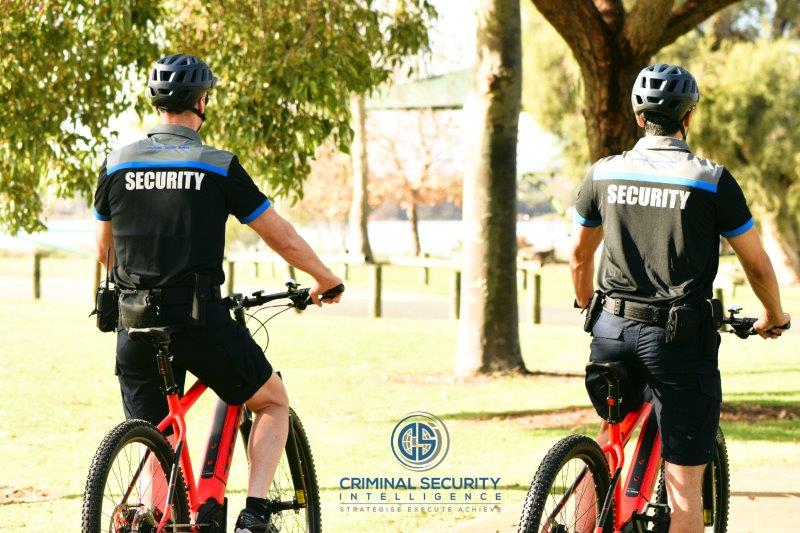 The patrol bike is less expensive than a patrol car or motorcycle yet nimble, quiet, and far more community friendly. A popular choice rapidly gaining attention globally within police departments and security services. After researching the benefits CSI are leading the way at a local level exploring and embracing the new technologies.

Results: The boost from electric motors allows officers to ride further and longer than they could on a standard mountain bike, allowing them to expand their patrol area, cover more ground with stealth approach, arrive at incidents less fatigued, and provide personable connection with the community.

The introduction of electric bike technology has taken the patrol bike into the 21st Century. The electric patrol bike looks and functions just like any other security/police mountain bike, but with one notable exception.

Twist the throttle on the right grip and off you go. If you are responding to an incident, these bikes will close the gap quickly with timely response. If you are riding up or down hills, you’re not out of breath, and are not fatigued.

Bikes provide officers access to areas that are difficult to get to quickly in a vehicle, particularly in areas of heavy congested traffic, allowing officers to pursue suspects in crowded areas, through tight spaces, or challenging terrain a motor vehicle struggles.

Traditional bicycles have their downsides. They require a lot of energy to pedal and cannot go as fast as officers sometimes need to move. Security and Police officers also have to carry a lot of equipment, which makes a bicycle heavier and harder to ride uphill or for long distances.

However, there is a way to get all the positives of a security bicycle program and eliminate the negatives. An e-bike, or electric bicycle, which uses a pedal-activated electric motor and battery provides riders an extra tailwind to pedal faster uphill and over longer distances.

With a boost from an electric motor, officers can ride further and longer than they can on a standard bicycle, allowing them to expand their patrol area and cover more ground.

Officers not only get to a scene faster, they arrive stronger. The boost from the motor means an officer arrives at a scene less fatigued than he or she would be after powering a traditional bike at high speeds using just their legs, so they can use more energy elsewhere and less for pedalling.

CSI have effectively utilised our e-bike service demonstrating their capabilities including neighbourhood patrolling, crowd management at special events and reports of suspicious persons/activities. The bikes are not just useful for transportation, officers can use them to create barriers in the event of a threat for officer safety, and tactical disengagement.

There have been a number of incidents when police officers on e-bikes have secured arrests where police vehicles have not been able to get to the situation as quickly.

CSI e-bike officers observed a person acting suspiciously.  A marked police vehicle pulled up and the person of interest quickly walked away, trying to blend into a busy car park. The patrol vehicle was stuck in traffic, though an officer with the ebike was able to freely move through traffic and catch up with the person. Police later arrived, and the person admitted he never knew an officer on a bicycle was behind him.

“Local communities are so supportive of this safety initiative and love having us come through the neighbourhood. It is a great opportunity for the team to better connect with the community in a more personable approach, and that in turn creates safer communities. You are definitely closer to the community and those barriers are quickly removed. Whether someone is asking for directions, somebody requires services for example homeless person/rough sleeper, or something more intense like a domestic dispute, it puts officers closer with early intervention and support. During events that attract large volumes of people, it is almost impossible to get through in a motor vehicle, and just as challenging performing foot patrol. CSI security bicycles are fitted with LED warning lights and people make way for officers in crowded places. You are also positioned higher up and can manoeuvre through the crowd better. It provides a great opportunity to observe your surroundings.”

CSI regard all events as highly beneficial as it allows increased exposure to showcase our bikes, and a chance to educate people on our service capabilities.

CSI Bike Patrol officers undertake a 30-minute orientation class to train officers on the special features of the e-bikes, including the computer screen that is mounted to the handlebar and how to select the level of desired pedal assistance, and LED emergency warning lighting system.

If you are experiencing an increase in crime or suspicious activities in your local neighbourhood or business area or require a high visibility security presence at your next event call the CSI team today.